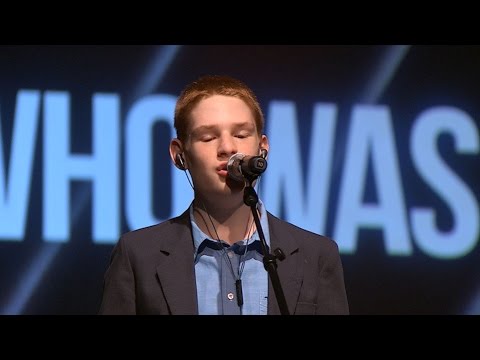 “Seeing is a gift that I share. Because I’m blind, I see people with my heart for who they truly are instead of what they look like on the outside”

Faced with so many challenges at birth, its hard to believe just how far Christopher Duffley has come. Christopher was born very prematurely with a host of medical conditions due to maternal cocaine and oxycontin use. In addition, he has been blind since birth and was diagnosed with autism as a toddler. Soon after leaving the hospital as an infant, Christopher was placed in foster care. It was not until he was adopted by his Aunt Christine at the age of two, that his life began to turn around and the gifts he shares with the world began to be revealed.

From the first day Christopher was brought home by his Aunt Christine, she recognized that he had a profound love and talent for music. In preschool, when he formally received his autism diagnosis, Christopher’s Aunt sought out Music Therapy for him. With Music Therapy, Christopher thrived. He went from having very limited language to developing an advanced vocabulary, ability to comprehend, and communicate with the world around him. He was found to have the rare auditory phenomenon of perfect pitch which allows him to re-create a music note without referencing the tone. In 4th grade his music teacher taught him the National Anthem. “The Star-Spangled Banner” is his first public performance, which he sang for his elementary school.

He went on to sing the National Anthem many more times for even bigger audiences, including at Red Sox games at Fenway Park. One of his most notable performances was of “Open the Eyes of My Heart” with a large choir at 10 years old. This video of the performance goes viral, racking in 5 million views the first month and more than 22 million views a week by the second month.

Christopher Duffley, now 16 years old, is an exceptional singer and runs his own podcast titled ‘Mission Possible’ in which he does his own editing and engineering for. Christopher says, guests on his show are all “people who have a mission.” His own ultimate mission is be an advocate for others, helping as many people as he can to rise above their struggles and find their purpose in life.

How’s that for inspiration!  Become an RBT Autism Therapist, educate, enrich and inspire the lives of children diagnosed with autism. Let Autism Therapy Career College lead the way to your rewarding future career!